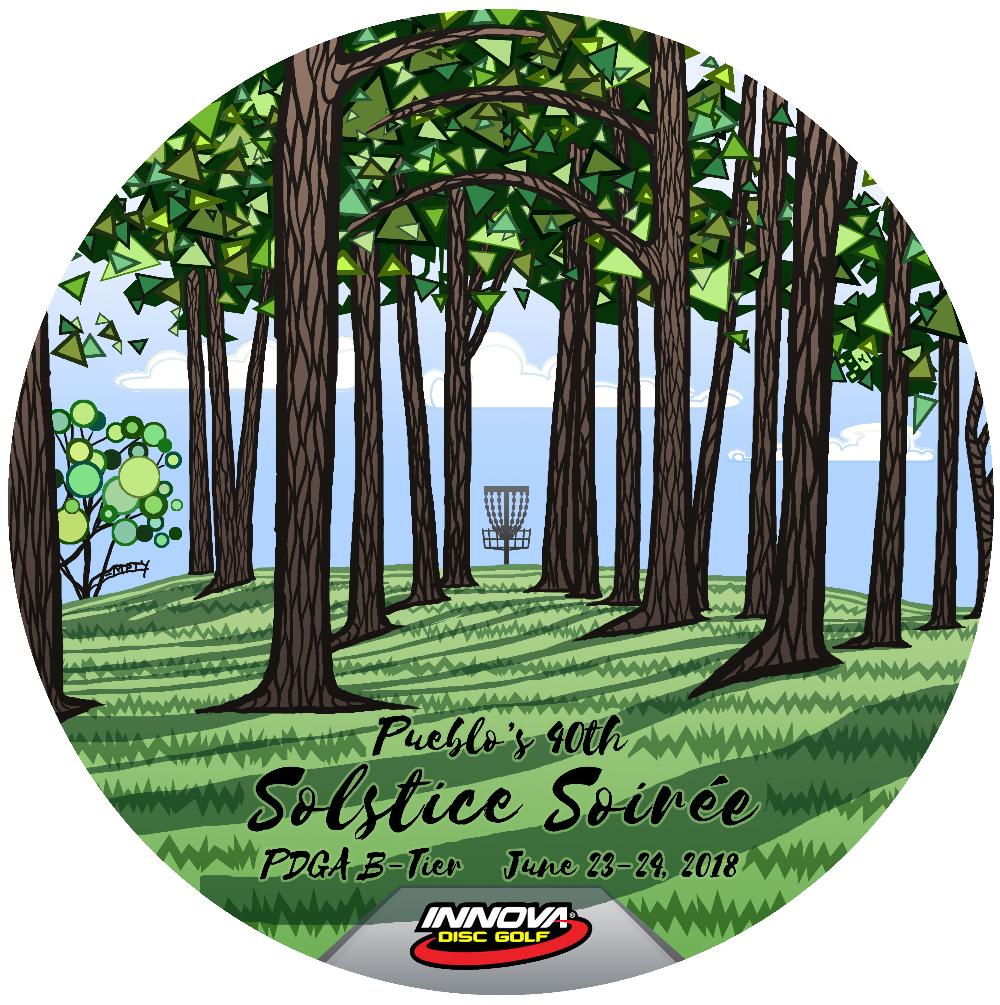 The Solstice Soirée disc golf tournament is back to celebrate summer solstice and the 40th anniversary of the Pueblo City Park disc golf course, installed in 1978 as one of the first courses in the country. The original 9 holes were designed by the father of disc golf Steady Ed Headrick. The disc golf tournament will be a PDGA sanctioned B-Tier event with one round of 20 holes each day starting later than normal. In addition there will be an accuracy course extra competition for $10 to be played with old style frisbees similar to those used in 1978, which half of the proceeds will go to Second Chance Wildlife Rehabilitation, a Pueblo charity.

Bring the whole family! There's plenty to do surrounding the disc golf course at city park like the Pueblo Zoo, The Rides At City Park amusement park, Tennis Courts, Skateboard Park, Pool, Kids Playground, Horseshoes, Bocce, and Arboretum. Not to mention the adventures to be had outside of city park like the Buell Children's Museum, Nature and Wildlife Discovery Center, Pueblo Motorsports Park and the El Pueblo History Museum. Here is a PDF of the Pueblo Parks & Recreation Program Guide.

If you'd like to support this event but can't or don't want to play, please check out the sponsorship opportunities in this letter.

Sanctioned as a PDGA B-tier, this event will be a True Amatuer event where all amateur divisions will get a larger players pack and trophy for top 3 places, depending on number of competitors. Each amateur will receive a KC Pro Roc disc and an Innova Innsulated Canteen in their choice of color. The larger Advanced and Intermediate divisions will receive second disc of their choice while the Recreational and Junior divisions will have the opportunity to purchase an extra disc if they choose. There must a minimum of three players in each division and TD may consolidate divisions. Only the first 50 amateurs registered will be guaranteed a players pack. In addition the professional divisions will split at least $500 added cash to their payout purse. Here is a link describing PDGA True Amateur Events: https://www.pdga.com/td/true-amateur

There will be a players party on Saturday evening at PDub Brewery and Taproom in Pueblo West. They are also offering a 10% discount off all food and beer for tournament competitors. Here is a link to their website with a menu.

We have a Twitter account setup for all tournament communications including instant updates during the event. All information and documents will be posted to this website as well as notified on Twitter. Feel free to follow and tweet us at @SolsticeSoiree on Twitter. Also feel free to use the hashtag #P40SS on all of your social media posts regarding this event.

This is an extra competition in addition to the disc golf tournament. Half of the total entry goes to Second Chance Wildlife Rehabilitation. For $10 entry, you will rent 2 Innova Pulsar ultimate frisbees to play on one of the 10 hole accuracy courses. These Innova Pulsars are the same kind of disc used by Major League Ultimate teams around the country but more importantly resembling the frisbees used when the course was installed in 1978.

You get 2 throws at each of the 10 stations each differing in difficulty. One pint for each throw through a marked square and the most throws wins. There will be two different 10 station accuracy courses with 5 people on each course at a time. Only those players who turn in their scorecard with the Pulsar frisbees will be counted. Will do multiple divisions and possibly placements depending on demand. You can play the accuracy course at any time before or after the disc golf competition.

This tournament is supporting Second Chance Wildlife Rehabilitation, a 501(c)3 Pueblo nonprofit organization operating under permits from Colorado Parks & Wildlife and the US Fish & Wildlife Service that accepts all birds, turtles and tortoises and small mammals including bats for rehabilitation.

Half of the entry fees from the Accuracy Courses will be donated, there is also a straight cash donation option on the registration page.